​​Pick Up Location: Hope Lutheran Church
​On the corner of 466 & Morse Blvd.
250 Avenida Los Angelos
The Villages, FL 32162
(Please Park On the Side Closest to Morse)

Historic Tours of Flagler College highlights the architectural heritage of the former Hotel Ponce de Leon, listed as a National Historic Landmark. Built by railroad magnate, Henry M. Flagler in 1888, the Ponce is considered one of the finest examples of Spanish Renaissance architecture and was one of the most exclusive resorts of its day.

Guests will begin their tour by exploring the courtyard while learning of the hotel's Spanish Renaissance architecture and of the techniques and innovations used to construct Henry Flagler's vision. Next is the grand lobby where they will stare up into a 68-foot domed ceiling supported by eight ornate oak caryatids hand carved with robed women, each slightly different from the next. The guest will move on to the dining room where 79 Louis Comfort Tiffany Stained Glass windows stream light onto the beautiful hand-painted murals on the walls and ceiling. Finally, they will visit the Flagler Room, formerly the Women's Grand Parlor, where they will gaze upon handcrafted Austrian crystal chandeliers, a clock containing the largest piece of intact white onyx in the western hemisphere, original hotel furniture and art, as well as personal photos and mementos from Henry Flagler and his family.

Marineland Dolphin Adventure tin St Augustine is the world’s first oceanarium. You can watch our Atlantic bottlenose dolphins from a closer venue on the dolphin deck. See our world-famous dolphins swim and play, plus marvel at hundreds of species of sea creatures – from eels and rays to octopuses. See sea turtles and sand tiger sharks in Neptune Park. Explore 80 years of history in our new museum. And enjoy the following exciting daily programs:

•Narrated shark feed every day
•Narrated dolphin training demonstration
•Narrated sea turtle feed
•The Behind the Seas Tour will take you on a journey back in time, where dolphin echolocation was first discovered, and where the first dolphin was ever trained. 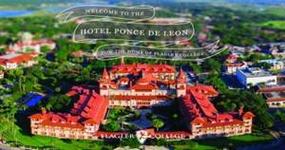